I managed to get to Kirkstall again to get some more photographs to expand upon the images and trials that were mentioned in the first blog.

Part of Dalton’s thinking when he set up the labs was to trial concepts and also challenge ‘heritage’ thinking around store setup and availability. Whilst Dalton has been relatively impressed with availability, there have been questions as to why the full ‘range’ hasn’t been on display when stores are facing across to make the displays look full.

Historically stores have been told to focus on a full shop for opening time meaning that (as mentioned before) the fresh chicken counter would have a full range for 8am. Although this thinking served the company well, Dalton has challenged that and Kirkstall goes a step further by opening the Oven Fresh department at set times. Only Saturday does the counter open at 8am with the store. 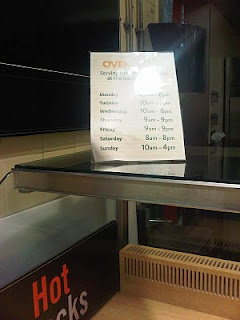 Whilst long standing employees may have concerns with this approach with ‘it wouldn’t work in our store for x,y,z’. It makes perfect sense in Kirkstall as the trade for breakfasts / lunches are unlikely to venture to the Oven Fresh department as a destination with the revamped ‘Fresh 2 Go’ offer located in the foyer. 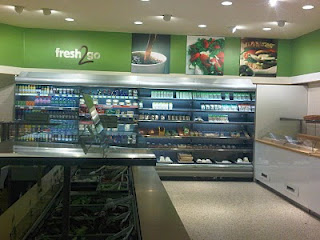 The Fresh 2 Go area is another focal point of the trial and offers a wide variety of experimental products such as Hot Subs to go, Fresh Coffee and Orange Juice along with sandwiches and an wider choice of salad items, the previous salad bar that was on Market Street is now an Olive Bar to further highlight what a departure from tradition this store is. 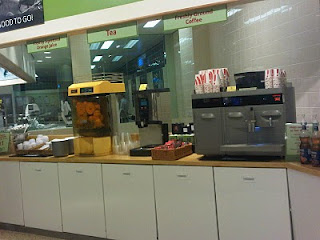 The store is set up to cater for the early morning trade with the freshly squeezed Orange Juice (is juiced before your very eyes) and any ones already prepared are displayed in an ice bucket. There are also croissants and other pastries available.

There is a wealth of product available on the Produce section which has been covered a couple of times in various publications (Retail Week and I did a piece for Eurofruit in Jan) so there are some further pictures attached. The ice beds are a focal point of this trial and the POS looks excellent with a good detailed description of each item and cooking / eating instructions. 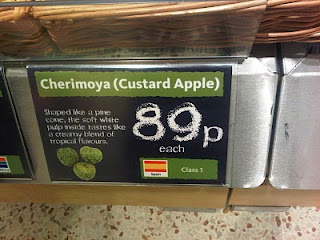 Another focus (along with Custard Apples!) is more exotic fruit, especially loose items which traditionally the waste sensitive Morrisons have shied away from to save on wastage. There are several different varieties on display and many of which are loose and then displayed either in cases or on the ice. Not only are there issues with wastage but also productivity, Produce is a relatively easy department to replenish as many products come in the green cases that are merchandised straight onto the display, however the lines displayed on Ice are decanted first which adds time to the process. 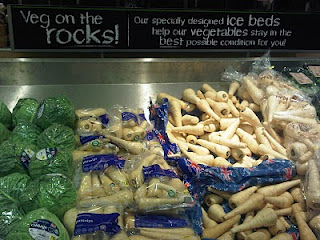 There is an increase in loose items and the usually under represented exotic fruit section sees more lines ranged than a typical store let alone Morrisons. Most of the replenishment has the inner tray lifted from the case into a wicker basket to enhance the market stall ‘feel’ along with the advertising with market style font.

There are some lines that require decanting totally – again at a cost to productivity so it remains to be seen what the balance will be with the trial. Whether lines will be discontinued depending on sales and the ‘ambition’ scaled back will be interesting to see. 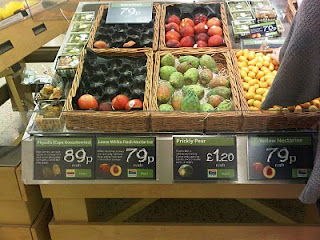 There is a cost asociated with the new ranges in terms of wastage and increasing labour spend so it will be a task to marry that up against the increase in sales and profitability – likely to be at a better margin than their rivals due to the Wm Morrisons Produce purchasing / sourcing operation.

The new signage was mentioned in the last blog and I managed to get some photographs of the Fish signage, certain former Safeway colleagues may draw comaprisons with how Safeway used to design their instore signage and it’s certainly more ‘contintental’ with Dalton drawing on his extensive international experience for these signs and images. 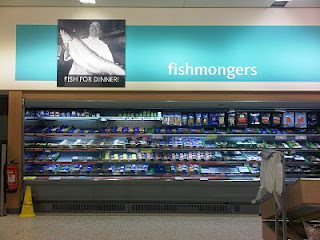 Morrisons have also made subtle changes to the range of existing products, for example moving the salad bar to the front of the store and adding ‘premium’ salad lines in addition to the standard lines. Adding an Olive bar to the site of the Salad bar is another clever change. Keeping with this theme, Morrisons continue to stock their own range of pizzas but have expanded to also produce the ‘Pizza Express’ style Pizzeria Pizzas. These are priced at £3.50 and are available in various flavours – Potato, Smoked Salmon and Pancetta are not what you expect at M! 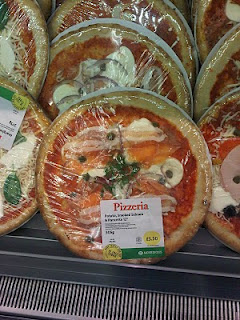 The Ready Meals section is one that Dalton has identified as ripe for movement, especially with Morrisons vertical integration allowing for new ranges to be brought to market far sooner than their rivals. The new signage ‘Meals in Minutes’ groups together all the ready meal options including the meat based ‘Fresh Ideas’ range. Some clever product placement means that a selection of wines are also available – almost like a ‘one stop shop’ for an evening meal. 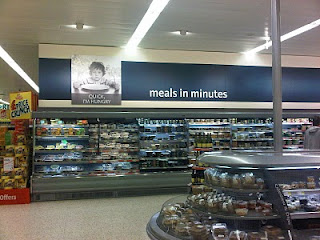 I did mention that the Grocery side of the operation now looks a bit forgotten about with the focus on Fresh and the opening up of the ‘market hall’, there is some new signage on the walls where space allows. This is in the same style as the counters signage with soft lower case lettering. 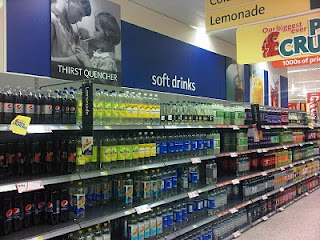 I do feel that the Grocery side of the store may well get a revamping ahead of the private label relaunch that is rumoured to be occurring at some stage later this year, especially with the recent hirings of Belinda Youngs et al plus Richard Hodgson’s obvious experience with private label that was honed at Waitrose. 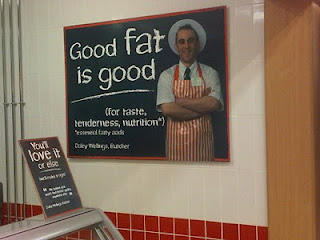 The focus on fresh goes right around Market Street and ends up at the Butchery, new signage indicating that the ‘best butchers may only pass this point’ and information like ‘good fat is good’ and a guarantee that ‘you’ll love it or else (we’ll make it right)’ – Again the consistent theme is white chalk font on a black background to add the focus upon it being a ‘market’ with local produce. 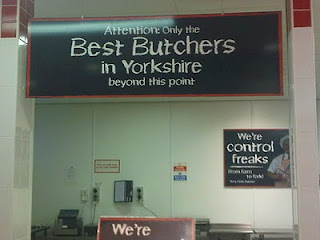 With today’s acquisition of Kiddicare primarily for the online movement, it shouldn’t be ignored that Morrisons have been looking to improve their general non food offer and that extends to health, beauty and baby. Kiddicare’s branding on the Morrisons baby range would drive brand value upwards and it’s likely that Morrisons will roll out more toys for the baby market. They have launched a small selection of toys in Kirkstall supported by some good POS and a good focus on a party range such as balloons, party poppers and streamers along with other things. 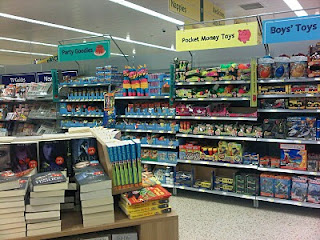 A final change is the split from customer service desk and cigarette kiosk, interestingly they did used to be two seperate units but were merged some four years ago, within Kirkstall they’ve split the two out again. The Customer Service desk is a stand-alone cube similar to what Asda have in some of their stores (Halifax certainly) and the Cigarette Kiosk is just to the left of this picture. 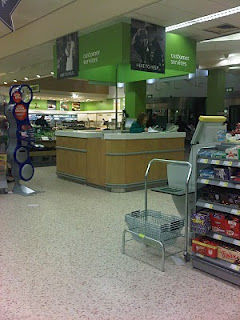 Although the desk isn’t in a primary location (foyer in the ‘old’ Kirkstall) it’s still in a good location and allows the desk to be visible by customers as they enter the store itself whilst not taking up prime retailing space.

As the two blog posts will show – the trial is real departure from traditional Morrisons thinking about how things should be done. I’ve heard various things around Dalton’s changes and a lot of it is relatively small scale, more about shaking people from their way of thinking and looking at different angles.

Obviously this is seismic change compared to heritage Morrisons stores – Enterprise 5 still had the Victorian style house hanging from the roof until last year, it’s possibly incurring more waste with the loose items and range increase but marry that up against the profitability of the new ranges, customers it will attract and general sales increase and the chances are the margin is better than before as the store is selling own label product that attracts a good margin due to the vertical integration.

I don’t think there’ll be anything negative attracted to this ‘noveau store’ as Dalton explained at the last analyst presentation that there were no accounting provisions to be made as the stores should perform at usual levels – he’s not a risk taker by definition. 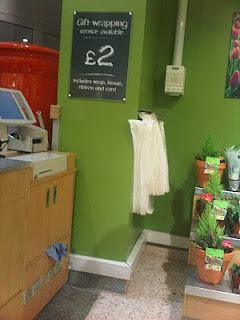 The Flower shop was mentioned last time and this in particular is a real focal point for this trial, again tapping into Morrisons sourcing operation in the Hook of Holland and Bradford meaning that a greater variety of flowers can be delivered into store. The mini shop also offers a flower wrapping service with a gift wrap, tissue and card for an extra £2 – an excellent way to drive sales and profitability.

Well worth a visit if you can get down at any stage – usually a plethora of colleagues from Hilmore House and beyond however.